Xi calls for building of China-Cambodia community of shared future 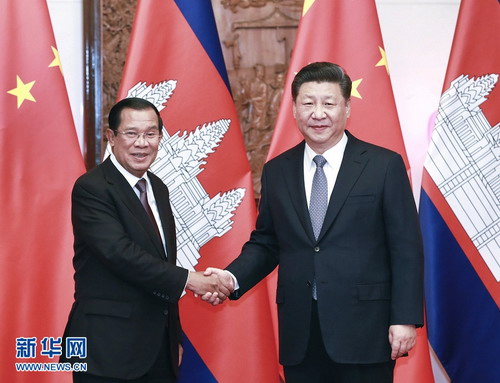 Xi spoke highly of the development of bilateral ties, noting that last year marked the 60th anniversary of the establishment of diplomatic ties between the two countries.

He said that bilateral cooperation on the Belt and Road Initiative has produced more and more practical outcomes, and the two sides have maintained close communication and coordination in regional and international affairs.

China is willing to work with the Cambodian side to build a community of shared future with strategic significance, further clarify cooperation priorities, map out a blueprint for development of ties, and promote bilateral relations to a new high, Xi said.

The Chinese side supports Cambodia in following a development path in line with its national conditions, Xi said.

He called on the two countries to maintain high-level exchanges, strengthen sharing of governance experience, expand exchanges between governments, legislative bodies, political parties and at sub-national level, and deepen communication and coordination within multilateral mechanisms such as the UN, China-ASEAN and Lancang-Mekong cooperation.

Xi expressed the hope to accelerate the synergy between the Belt and Road Initiative and Cambodia's development strategy, and promote cooperation in the five sectors of transport, production capacity, energy, trade and people's livelihood.

Hun Sen congratulated the Chinese people on the great achievements scored over the past 40 years of reform and opening up under the leadership of the Communist Party of China.

The consolidation and development of traditional friendship and comprehensive strategic cooperation between the two countries are satisfying, the Cambodian prime minister said.

He expressed gratitude to China on the long-term firm support and valuable assistance, as well as the friendly feelings toward Cambodia, especially its royal family.

Hun Sen said the Cambodian side stands ready to jointly promote the Belt and Road Initiative with China, enhance cooperation in areas including people's livelihood, agriculture, trade, investment, tourism and infrastructure, boost people-to-people exchanges, strengthen law enforcement and security cooperation, increase communication and coordination in international and regional affairs, and continue to understand and support each other on issues concerning their respective major concerns.